Love for the Past: Retro City Rampage Brings It All Back! 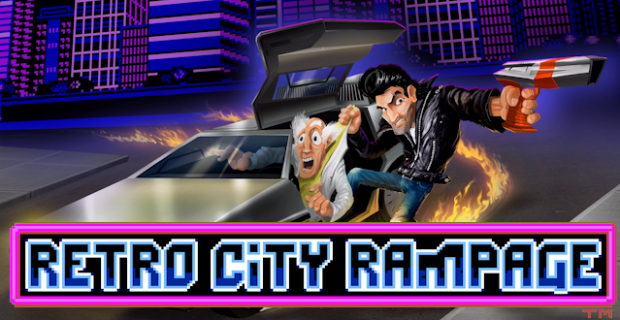 I’m someone that is way too connected to the past. If you saw my DVR list or my search history I’m always looking up and watching things from the 80’s and 90’s. It’s not that I don’t like modern things. I really do when they are good. But I have a greater appreciation for films, games, styles and the music specifically from that age. It’s just what I grew up with and what I will always love the most.

So, I was talking with a good friend and fellow member of my ESH family B3’s King-Baby-Duck about what I should do for my first review as an official member of ESH. He, knowing my taste, said he has the perfect game for my first review that could take that love for the past and mix it with my love for blatant destruction and modern convenience. He suggested Brian Provinciano’s Retro City Rampage recently released for Wii Ware. I had not gotten a chance to play it yet, so it was the perfect game to get my feet wet with reviewing. What a ride it was playing this insanely fun game.

My overall score will be out of 10, but the game will be judged for what it’s trying to accomplish. To give a few examples: I would give Super Mario 3, Knights of the Old Republic 1, Arkham City, Pac-man, and Tecmo Bowl all 10 out of 10. That rating is regardless of the genre or age it was released. It’s just what I feel they were trying to accomplish with a game, how successful they were, and how much I enjoyed it.

Retro City Rampage at its core is an open world game, in the vein of a Grand Theft Auto. In fact, when first starting to play I would often get a feeling similar to the first time I ever played a GTA game. A feeling of complete freedom to explore a very alive city, full of all types of characters and many things to do as “player” who is a simple criminal set to accomplish tasks in his wacky criminal world.

Very quickly you see that this game is much more than just an open world game. It’s more of a tribute, a love letter to gaming history with constant smart referential humor. Yeah, I wanted to see how many pedestrians I could hit with the wonderful supply of vehicles you can “borrow” at any time. At the same time the game goes out of its way to remind you of some of your favorite franchises from the 8-bit age, and all in a very upbeat entertaining way.

As you might have guessed from the title, Retro City Rampage is designed in world of the 8-bit past. The graphics of the game have the looks similar to an old school NES game and they look great. The music sets the tone, as well being very familiar, but unique to the game and what mission you are on. I would sometimes stop playing for while just to flip stations on the radio, to listen to the rocking 8-bit music tracks.

The game also use some of today’s advances to immerse the gamer in the retro world, such as achievements, customization, auto save, game speed, ROM City Rampage; a prototype NES version of the game and more. The city you inhabit looks similar to the over world in Teenage Mutant Ninja Turtles for the NES, which is sick because I always wanted to explore and kick ass in that world. Many buildings have things to do inside like play arcade games, gamble, run side missions, and customize your character.

The story is basic, but very entertaining. Right from the beginning you will be overwhelmed with the nonstop references from 80’s/90’s pop culture and gaming history. It is especially fun when you get to interact with characters from different franchises and at times and it almost plays out like fan fiction. I like the main story, but was way more impressed with the rapid fire jokes and humor that the game had to offer.

All in all the atmosphere of this game really brought you in and with access to different cars, weapons and things to do in the city Retro City Rampage really makes the 8-bit world alive like it never has before. 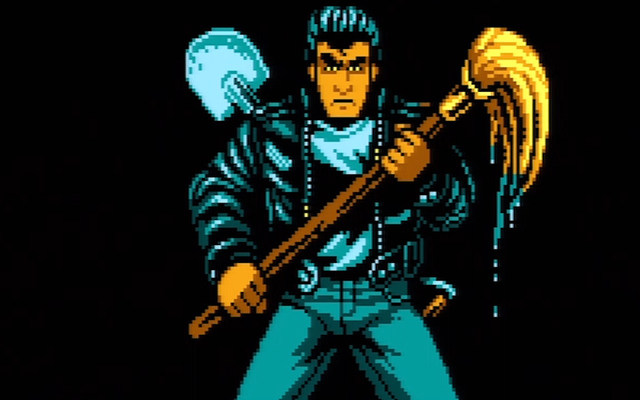 Retro city Rampage felt rewarding to play and I have zero complaints about the way the game plays. The controls were very responsive and all the vehicles had a very different style when driving. Some were extremely funny. I wont spoil much in this review, but I will say my favorite of the vehicles that you see around town looks very similar to the Turtle Van for the aforementioned TMNT NES game and when you steal it, someone looking remarkably like Michelangelo comes out looking real pissed off. It’s this level of detail that this game brings to the table. Tons of weapons change up how you can handle enemies and for lovers of Super Mario you can even stomp on your foes heads.

When playing with a classic control style the layout is perfect. You can shoot your weapons (guns) with right stick, which is very accurate. When using the Wii remote (and I used this more because of convenient purposes) it became a bit harder, but was still extremely playable. After a while I had no issues playing this way. In fact, I always like playing any throw back or retro game with this control scheme; it really creates that nostalgic sensation being so close to the feel of the NES control pad. 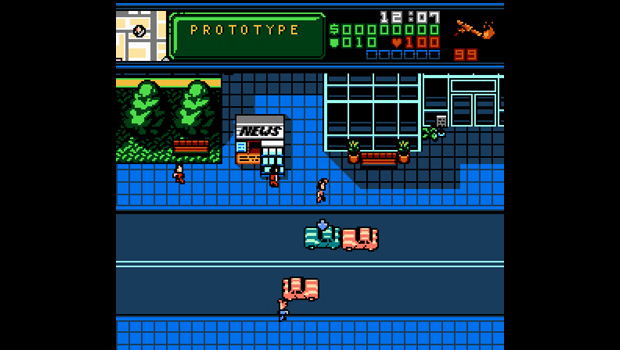 Retro City Rampage is a game I will always come back to over the years. It’s what I call a “friends over game” as well, because I want to show it to my old school gamer friends when they come over. Even old friends who may not have gamed in years would love it. The arcade challenge mode and free play are perfect for having people jump right in for party play without wasting any time.

After finishing the main story, because of all the rapid fire of jokes and references, I personally wanted to immediately play the game again to experience the fun and see what I missed. This game is crack for me and I couldn’t get enough of it! At least for the reasonable future, this will be in my weekly gaming life to pick up and run through the city causing havoc.

Not many issues, but nothing is perfect. One of the strengths for me could also be a weakness for some people. The game, as I mentioned, has cultural references thrown at the player in rapid fire from beginning to end. While I do love this, when observing someone else playing through the story mode they said more than a few times, “Wow it all happens so fast I keep missing things. I wish it would slow down”. The game is like watching Robin Williams do stand up back in his coked up days. Non-stop frantic action and I can see how that might not be for everyone.

My only real issue is actually a personal wish. I would love if it was possible to zoom in a bit on the city; same thing in Tecmo Super Bowl, I wish you could zoom in and make the players bigger, like in the original Tecmo Bowl. It’s not really a big deal, but I’m a bit blind. Zooming in would have just been an amazing extra option. But at no point did this detract form my enjoyment of the game it only would of helped me personally immerse myself even more in the action and humor.

Retro City Rampage is a title that any life long gamer and anyone with some gaming knowledge, love for 80’s-90’s pop culture, or just a fan of the 8-bit age, owes it to themselves to play through. You will smile and laugh more times than you can count and it’s a fun game for local play with friends working on challenges while rampaging through the city. The game has fast paced action which can become overwhelming at times for some, but the games fun factor pushes it to the point of a must play for everyone.

Loves
Cultural references will have me laughing for years and sharing with friends
Game play amazingly fun, easy and rewarding
Incredible amount of extra content for non-stop action and lots of love put in by the game designers
Music is perfect!

Final Issues
May be a bit too rapid fire for some folks
Sensitive people need not apply, as this game glorifies violence in the best cartoon way
Gameplay is so fun I could care less about a story
Wish you could zoom in on the city