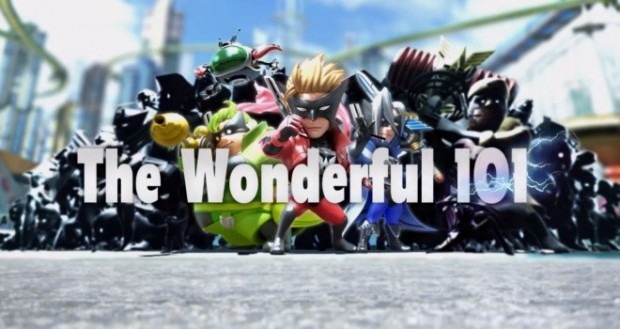 The Wonderful 101
Wii U
Platinum Games

It seems that a lot of people are complaining that the Wii U doesn’t have any games. Mention to anybody that you have the system and they make a comment similar to, “How does it feel to not be playing any games?” or “How does it feel to be on this gaming generations equivalent of the Titanic?”

Being a card-carrying member of the Nintendo fan club I can’t even deny that the launch window thing was a silly idea and the game lineup so far has been pretty sad. One of the games that I hoped that came out right at launch was Platinum Games The Wonderful 101. This was the perfect type of title that should of launched with the system. A game built from the ground up to show off what the U-pad can do and to explore the power and capability of the system. 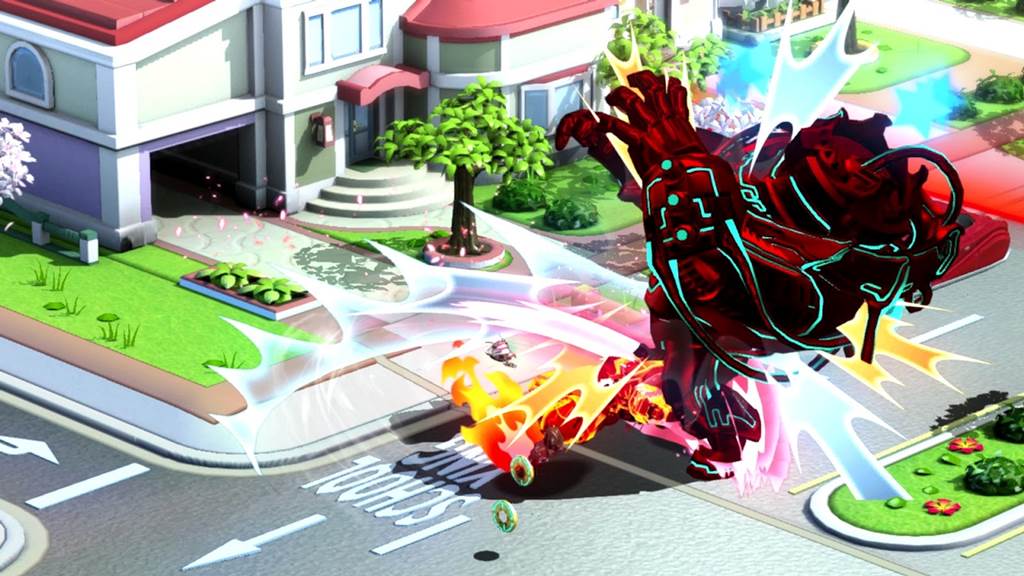 For a point of reference The Wonderful 101 was created by Hideki Kamiya, the same guy who made Okami and Platinum Games is responsible for Bayonetta, MadWorld and Infinite Space to name a few. The Wonderful 101 is a completely different kind of game then anything they have done in the past. The Player controls up to 100 superheroes at the same time using attacks, abilities and changing all of your heroes into many different shapes/weapons. (Using an ability called Morphing) This can cause massive damage or unique effects depending on the enemies you’re facing.

So in a sense it has a kind of a Voltron meets Pikmin feel to it. The basic story of the game is the heroes you control are protecting the world from an alien invasion and throughout the game you unlock other superheroes to switch in your team and learn how to do different morphing abilities.

The story of 101 is a silly but strangely deep tale and there are some interesting aspects and twists to it along the way. The game is very funny and had me smiling and laughing throughout playing. It’s the type of game I couldn’t wait to unlock more aspects of the story and actually sat through all the cut scenes without trying to skip them. In fact I would actually watch a cartoon based on The Wonderful 101 if it was ever made. 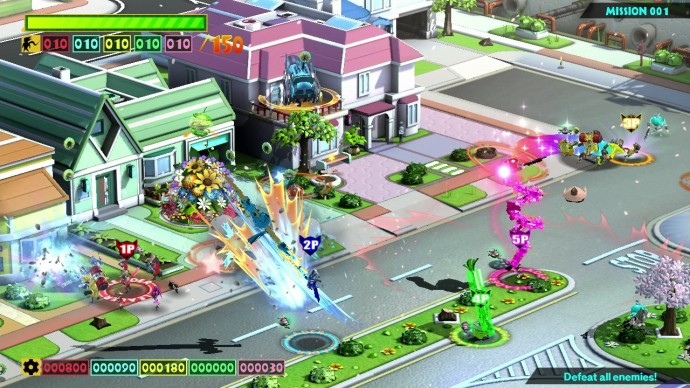 The game looks very beautiful being very colorful and offers a great example of the capability graphically of the Wii U when developers are not lazy and know what they are doing. The player has a great deal of control on how they view their superhero team. Personally, I like to zoom in as much as possible so I can get a really good look on all the characters. When you zoom in you see how much detail goes into each of the superheroes and enemies. Just a great deal of time and love went into the making of this game. Coupled with Pikmin 3 the power of the Wii U is perfectly shown off in these titles. This game has more of a cartoon city feel to Pikmin’s nature look, but both are excellent at balancing all the action that is going on screen with the many moving interactive parts.

The Wonderful 101 moves at an epic pace and never actually slows down. The game just keeps pushing and pushing being extremely intense the whole time. The game may be a bit confusing for a pickup and player type and they may not understand exactly what’s going on. I could see how one could become frustrated with the game. There is a steep learning curve to master 101. 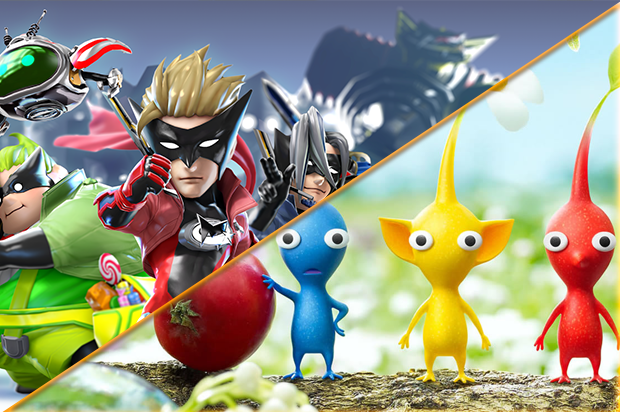 As I mentioned a few times the game does have a little bit of similarity to the way that Pikmin plays but at its core it’s a lot different. It’s more of an action game apposed to Pikmins focusing on more puzzles. The most important part is the games combat feels very satisfying and really good to beat the crap out of anyone/thing that stands in your way.

Using the morphs can be difficult at first but once you get whats going on it’s really easy. You can either draw the particular shape on the pad with a stylus or you can find the proper way of using your right analog stick to create whichever weapon you want. Now don’t worry too much about how well you draw the shapes the game is very forgiving in that aspect. The more heroes you gather the larger the weapon you draw will be. But the player does not have to morph all the team. While some of heroes are used to create a giant shape others can do individual tasks. There is a lot of multitasking in this game and if you can figure it out and get all the gears going at once it can be a thing of beauty. But as I mention this can be overwhelming for people just picking up and playing the game that are not familiar with games like this since well… Lemings. You have to think about this from the standpoint of 100 characters not thinking about it from one.

Is also has a fair share of puzzle solving not just action. The puzzles are implemented by using the different morph abilities or special abilities to get your way through the challenge. Some examples are needing to build a bridge or pile all 100 heroes in a booth to be transported somewhere else. 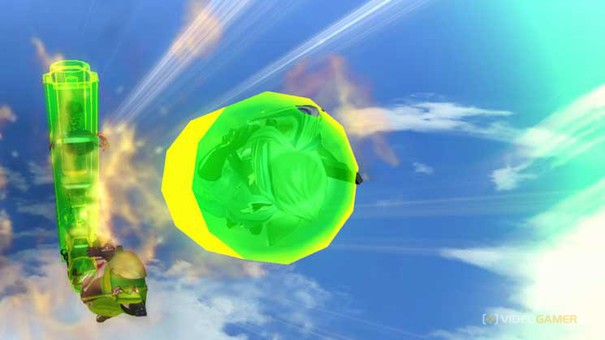 Every world thats gets unlocked offers some sort of unique challenge. There is one world where the game play shifts and turns into a more of a rail shooter type mini game. There is also another aspect when you go inside a building and you can no longer see on the television and you can only play the game on the pad. This expansion of normal play just shows off what a great gaming company can do with the Wii-U when they try. If Platinum, Ubisoft, Sega and more can make great games then all the smack about difficulty working within the medium just seem like straight laziness. Platinum has made a beautiful game using all aspects of the system and is 2nd (Pikmin 3) of the many games that will come out within the next calendar year to show off all what the pad and system can do. I hope more people get an opportunity to play this game when more Wii U’s sell.

Also it’s worth mentioning that each world has a giant boss and the fights are incredibly fun. This all culminates in one of my favorite final battles with a boss ever!

The Wonderful 101 story is about 15 hours not the longest game in the world but it does allow you to go back and redo the levels for higher scores, to unlock different characters, different abilities and find secret paths to finish the levels. The game also has a challenge mode which you or up to five players can take on some challenges and kick some butt. I have not tried it yet as I have been occupied in the story mode but this seems like a great addition to add to the replay value of the game 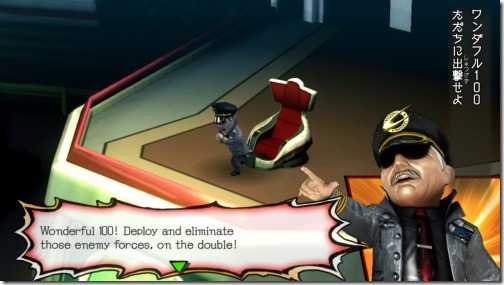 This is a game that I truly wanted as a launch title for the Wii U. Platinum Games has done an excellent job with the hardware and crafted a game that is not only fun but unique to the aspects of the Wii U. In an age where everyone quick to jump off and on bandwagons like The red car in “Who framed Roger Rabbit” it seems that my patience for sticking by the Big N has finally starting to pay off. The Wonderful 101 is the first in line of many games that will be coming out soon that will be bringing a surge to the Wii U. Maybe not to the commercial success that some of their haters claim is the only important thing. But for anyone that stuck around or new adopters get ready for some of the best games that come out this generation. Platinum thank you for The Wonderful 101 and can’t wait for Bayonetta 2!