Super Smash Bros Wii U: Like You Need a Reason

Super Smash Bros Wii U: Like You Need a Reason

It would be a major understatement to say I was a fan of the Super Smash Brothers series. I bought the Nintendo 64 version on a whim seeing the game in a store window then was mesmerized by the action in that game. It was a game that inspired me to bring my friends over to convert them into fans of the series as well and play for hours months and years to come. (Still to this day)

Then Melee came out and our passion continued we do not quite have the skill level of so many other people and as time goes on my friend group separated a little bit but again I logged many hours and have a love for that game. And to this point consider it the pinnacle of the series.

When brawl came out for the Wii I was rather rather excited I went out to Midnight launch came home and played all night but was never quite as mesmerized by the game style as I was to the others games in the series . Not that it was a bad game but there were a few noticeable differences. One mainly being the sound effects and just the general floatynes of characters and tripping… 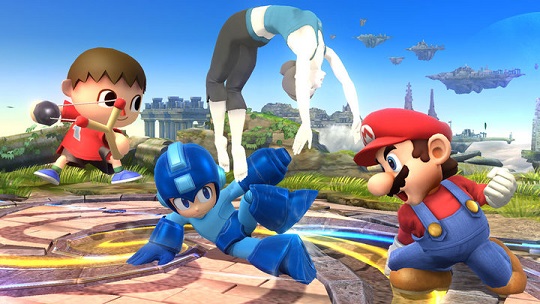 Enter 2014 and the release of Smash for the Wii U. This game truly encompasses all that is great about all three of their previous entries to the series. The sheer content of brawl the competitive nature of Melee amd some of the charm of the 64 version is all evident in the title.

It seems Nintendo really wanted to deliver on its promise to give you the best Smash Brothers experience. To review smash Brothers would be kind of ridiculous. If you haven’t played the game or any of the games yet. What is wrong? Are you ok?

But here you go. It’s an amazing fighting game with Nintendo (and other franchise) characters that is kind of like a sumo wrestling match. The goals is to knock your opponent off the board before they do it to you. 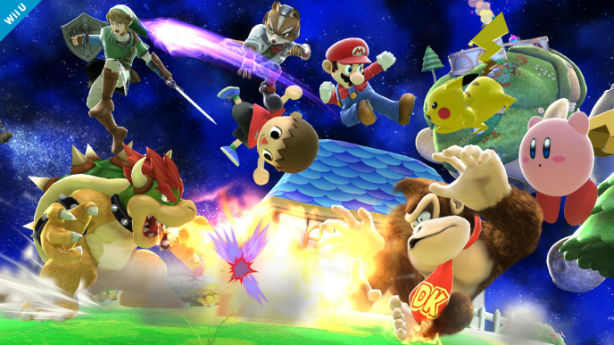 If you have played Smash Brothers game before and enjoy them and don’t have a Wii u you owe it to yourself to go out and get and thank me later. Yes there is a 3DS version as well and it is cool it can be used a control option. I would recommend that one as well it is a fun little version to play on the go, but this is the ultimate smash brothers for 2014. if you can only get one you definitely should get this one. I cannot suggest or rate this game high enough this game is on

Get it now! I have waiting for for a while having bought the Wii u at Launch. At the very beginning times were tough but patience has payed off off with titles like Smash, Mario kart 8 and Bayonetta 2 all having come out in this recent year. The present and the future look great for Nintendo.